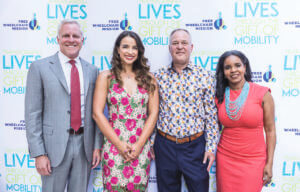 An unforgettable evening on filled with surprises, heartfelt inspiration and the pure joy of giving culminated with Free Wheelchair Mission (FWM) receiving over $1.8 million in donations in one night – the most ever at this event and enough to transform the lives of more than 22,500 individuals living with disabilities in under-resourced nations . Already, the humanitarian nonprofit has distributed 1.2 million wheelchairs around the world.
The 600-plus who attended the 16th annual Miracle of Mobility gala at Segerstrom Center of the Arts were treated to a fabulous gala evening.
Guests enjoyed an internationally themed cocktail reception with three different food stations offering a wide selection of global cuisine; including a poke bowl station with ahi tuna and salmon, the always popular mashed potato bar with yukon gold and sweet potato options with multiple toppings, and a Bangkok street fair station which featured chicken satay with coconut milk and peanut sauce and caramelized pork satay with pickled radish.
The evening’s special guest, 24-year-old Victoria Arlen, holds impressive credentials: ESPN host, Paralympic gold medalist, Dancing with the Stars semi-finalist, author and most recently, co-host of NBC TV’s American Ninja Warrior Junior.  Those credentials would be impressive for anyone but considering that Victoria was struck by two rare neurological diseases at the age of 11, causing her to be trapped in her body in a minimally conscious state for four years, it is an incredible turnaround. 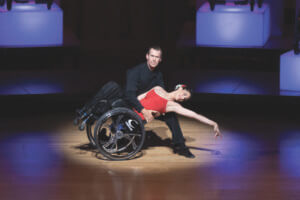 Victoria spoke about her journey, including the four years when doctors doubted that she would ever return and the subsequent several years when she fought back to begin life again. She offered a message of hope and the importance of being thankful for what you have.
Following Victoria’s talk, a robust live auction led to the donation of more than 21,900 wheelchairs to be built and distributed in 93 countries around the world. In 2017, Free Wheelchair Mission reached the milestone of one million wheelchairs distributed and now is pursuing its goal of reaching the next million by 2025.
Free Wheelchair Mission (FWM) is a humanitarian, faith-based nonprofit based in Irvine, Calif. that designs and manufactures cost-efficient, durable wheelchairs for individuals living with disabilities in under-resourced nations. FWM collaborates with a worldwide network of like-minded partners that facilitate wheelchair distribution in 93 countries. FWM provides renewed dignity, independence and hope through the gift of mobility at no cost to the recipient. Just $80, the cost to manufacture and deliver one wheelchair, can change a person’s life forever. Founded in 2001 by Don Schoendorfer, Ph.D., the organization reached the milestone of distributing one million wheelchairs in 2017. FWM currently intends to distribute the next million wheelchairs by 2025. For information or donations, visit freewheelchairmission.org.

Click here or the image to open the FBN form.

For more information regarding all legal notices and instructions, please visit our Legal Notice Help Page.